To Toxicity, and Beyond!

Two weeks after publicly announcing my ‘bumhood’ expiration, I am deemed to tell you my dear readers that my employment is just about to start yet: tomorrow. Yes, very confusing, I actually spent two unpaid weeks of what they call in-hospital training: listening to lectures, answering quizzes, sitting on seminars: most likely my college life in rewind.

Well, every hospital has its own special way of functioning, and Manila Doctors Hospital welcomed me with a feel of school a second time around. As I end this two training weeks, I enter my six-month probationary period as a trainee nurse; and after that, I will be a regular employee. Right, unbelievable: a hospital’s structure might look boring white to you, but believe me, it’s existence is as diverse as the colors of a rainbow. 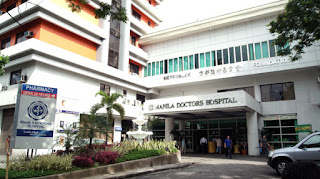 My humble workplace.. Visit me!

Luckily, my last day of training was last Tuesday, April 19; and we were sent home with some complicated news. The news was exciting for others, scary for some, and a mix of both for me: it was our area assignment. If you are not in the medical profession, you might think each station of the hospital is nothing but identical white corridors, beds, and hanging dextrose. But unfortunately for us, each area has its rare personality that is just too known to us.

So there, I was assigned to Medical-Surgical Ward 3C (take the elevator at your left when facing the enormous staircase, go to third floor and then turn to your most left). The ward’s name itself oozes in toxicity that when I was a student nurse, I couldn’t bear seeing it on my three-day rotation. I’ve heard that they have scores of 30 and above patients in that single area: a number that’s just too many for me to comprehend. I can now see myself looking pale, unkempt, and lunch-less during my shift. I know that I have to learn a lot in Nursing; and if this is God’s way of teaching me, I grant 3C strains the limits of the word.

Why couldn’t it be something simple, like the plagues, another Ondoy, or the end of the world? Why 3C?

When I told my friends that I will be a 3C nurse, they were like ‘Seriously? Goodluck tol!’ (very supportive indeed) some were more compassionate by saying, ‘You can do it’.

Yes, I have a license and I know what I can do. There are a lot of bum nurses out there and this is just not the time to get choosy. I have for years lived on the idea of wearing white and attending to patients, and its a bit late to back off now. I sometimes envy my colleagues who enjoy doing what we do. I hear them saying this profession is very fulfilling and caring for the sick is their way of spreading love and serving mankind. Truth to be told, I haven’t felt any of that and I wonder where do one get ‘fulfillment’?

I may have nothing but shallow spirits for Nursing, but I am certain that I will survive 3C not because I have no choice, but because I am no person who accepts failure. I will be like Toy Story’s Buzz Lightyear, a believer, a nurse, and I say…

TO TOXICITY, AND BEYOND!

How I Spent 9 Months of Bumness: A Pre-Employment Tale May 10: My First Payday