Healing Water Wellness Center: Giving You Massage Like No Other

By the time I came home this morning from night duty, the stress sent my body to a meltdown and I can only think of one thing: a massage. I don’t care how long, how hard; it’s just that I need one. So after sleeping, taking a bath and dressing up, I went straight to a spa center a few yards away from my house.

I’ve been eyeing this place for quite some time now; I just didn’t have the time to try its services. And besides, the name Healing Water Wellness Center doesn’t appeal much to me. I arrived at around 4PM and I must say I’m quite impressed: well-lit reception, aromatic place, and soothing music at the background. I ask the receptionist for their list of massage and after getting confused on the many choices, I asked her to choose one for me.

So this is what she recommended: Healing Signature Massage

Hmmn, not bad. A therapeutic massage that is a combination of Shiatsu, Herbal, and Swedish massage. I guess I could use that.

She told me to wait to be called as my therapist will still be coming from another branch. Cool, an imported therapist!

So while waiting, I photographed two spa attendants rendering foot spa to their respective customers. I thought I could use a foot spa too. 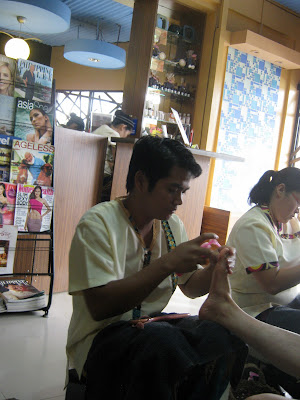 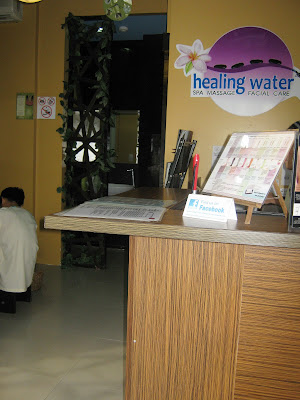 I waited for about ten minutes and then Fairy, my therapist, came. She ushered me upstairs to a small, dark cubicle with one massage bed with a large rose on top. The cubicle was one in a row of others divided only by curtains, and it’s quite annoying as I could hear the other customers’ bones cracking.

After getting into the proper get-up, I laid on my stomach and Fairy started kneading on my back with a sarong covering me. She’s really good at what she’s doing and I felt really relaxed already. She continued doing that for about 10 minutes and as I was thanking God that she do not use oil or sticky lotion, I felt my back undraped and some lotion being applied. Drat.

Fairy continued doing her thing and despite the lotion, the rubbing was incredible. The problem about writing a topic like massage is it’s hard to put into words that godddamn feeling, and a lot of times, I wasn’t paying attention to Fairy, I’m just enjoying the moment. Apart from my back, she also held my shoulders, legs, feet, and I was a bit surprised at this: my buttocks. It was actually a first that that part was touched during a massage, I almost wanted to stop her when she was pulling my underwear down; but I just let it happen.When she was done with my entire back, she asked me to face her. I was a bit dumbfounded, because again, that was a first. All my spa appointments before never asked me to lay on my back and now as I thought of it, I guess I was ripped off!

Fairy then massaged my front legs, arms, stomach, chest, and face. Man, that’s a total, complete, holistic, overall, what else? – approach. I totally love the feeling and that healing massage really healed me.

Fairy and I were together for 75 minutes and unlike those other massages that I wanted to go home before the time ends, my healing massage was enjoyable in each minute. After getting dressed, I went down with a cup of garlic tea waiting for me at the reception. The tea was hot and I was not able to finish because it made my throat sore, so I settled for a vanilla ice cream on a nearby Mini Stop. Seriously, spa centers must give customers complementary ice cream instead of rubbish orange juice or tea; ice cream’s far more relaxing.

I paid only P600 for the best yet massage of my life and now I’m ready for another week of night duty. Thank you Healing Water Wellness Center, now that I think of it, your name isn’t that bad. See you again when I badly need another massage. You guys rock! 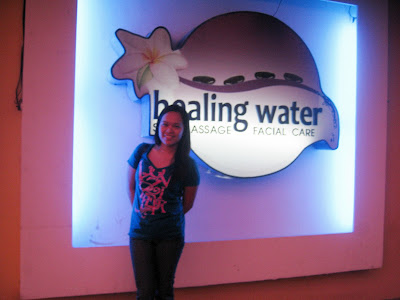