Some call it Reef Walking; an alternative to scuba diving where one can do pretty much the same: go around 10 feet underwater, mingle and feed the fishes. No heavy suits, no oxygen tank: just you, your swimsuit, and a helmet filled with compressed air on top of your head. It seemed fairly safe so my friends and I decided to make this Boracay trip memorable by trying out Helmet Diving.

We paid PHP 300 for the ride of our lives and were escorted to Red Coral Sea Sports. We were then briefed of the sign language to use underwater, and taught the concept of equalizing (an act wherein you blow your nose with your mouth closed, the pressure then will be released through the ears). I thought the briefing was way too fast and I did not really understand the equalizing part. 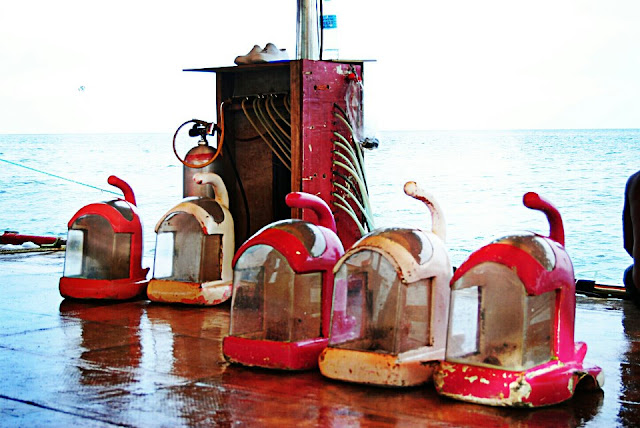 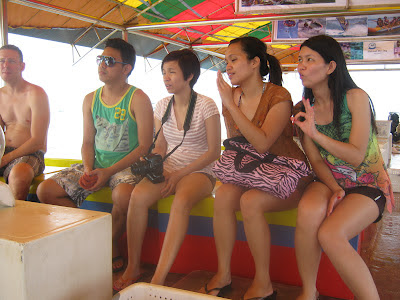 When it was time for me to go underwater and the helmet was positioned on top of my head, I was beyond nervous. I slowly went down the ladder and hit the waters. Upon going down, I felt a very sharp pain on both of my ears, the diver told me to “equalize” but when I did, it did very little to relieve the pain. The diver still led me deeper into the water, I was too scared I told him to brought me up.

Once up, Mr. Diver again oriented me, I gave it a second try only to get back again because of the pain.

I was back in the boat when my friend told me to give it another try. Adventurous as I was, I went back to the waters again, found the pain on my ears tolerable this time but when we were farther in the water, my head started to hurt. The diver then massaged my face and assisted me in equalizing. Finally, I was able to reach the ocean floor (thank God!). I felt fine walking underwater and I pretty much enjoyed seeing a totally different world. But to describe it as awesome would be unfair, so I guess it was just okay.

We walked for about five minutes and then I asked the diver to take my picture, but he declined! Through sign language, he told me that our time has exceeded and because it took me so long to go down, we don’t have time to take my photo. I was then pissed. Taking a photo would just be a couple of seconds and you can’t give me that?! 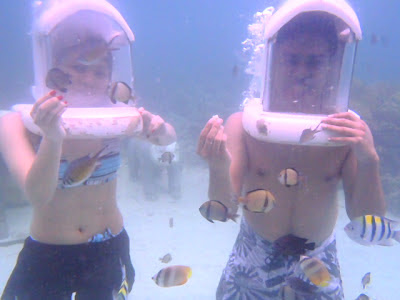 Janine and Rannie (Im so jealous!)

I was then brought up very quickly and when the helmet was removed from my head, I spitted blood. Panic rose through my body as when I blew my nose, I also saw blood. My friends were also worried but the divers and attendants around there told us that it was just normal. When has it been freaking normal to see blood? Blood is normal when giving birth, but after helmet diving? There’s really something wrong around here, I thought.

I then assessed myself: luckily, I have no headache, I did not vomit, I still can hear clearly. I have a heavy feeling at the back of my head though and on occasions when I blew my nose or spit, there are blood tinges. Oh God, these are the times when I’m thankful to be a nurse, although I regret being in this position, not everything’s as bad as I think it is.

On our way home, I saw floaters (small lights) on my left eye and soon half of that eye lost sight. We dropped off to Don Ciriaco S. Tirol Memorial Hospital, just for the sake of being sure. I was promptly attended by the nurse, my blood pressure was 120/100mmHg and as calm as I was, I began to panic again. The doctor then came, I retold the incident and she was so brave to tell us that Boracay’s Helmet Diving is unsafe, someone has died because of that. Holy Crap.

I went through some tests and was informed that both my middle ears bled because of very high underwater pressure; my eardrum is intact though, only the capillaries of my middle ears were damaged. No damage was seen in my eyes. I was sent home with antibacterials, pain killers, and decongestants to accompany my vacation. Wow, just wow.

According to my research, on July of 2011, the license of a popular Helmet Diving attraction in Bermuda Island, North Atlantic Ocean was revoked due to the death of one of its guests. The facility in Bermuda has been in business for more than 60 years, and yet something like that happened. Ours was just a few years operating and if I would be asked, I wouldn’t recommend it. Even though I don’t have a souvenir photo, there’s definitely no going back those waters. Safety is really an issue in extreme adventures like these, I sure hope the number of casualties stop growing. – Reference


Special thanks to Dr. Michelle Depakakibo for attending to me. I had doubts of provincial physicians because obviously I work for a big hospital, but you erased all my doubts. My ENT specialist agreed with your prescription, awesome work Ma’am. I am so proud that our country has physicians like you; tourists local and foreign are definitely in good hands. Thank you for saving my life. 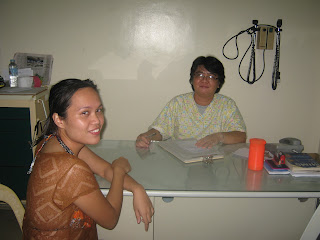 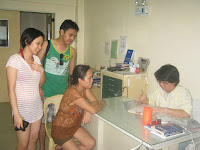