The Day All the Fuss Ended: My IELTS Feat

The agonizing wait is over. Four months of newspaper reading, mock examinations, fake applications to call center companies, and self-interviews in front of a mirror, did not, in any way, prepare me for the real IELTS moment.

I was a little shocked when my one-on-one oral examination was scheduled four days before my written tests. I have been told by IDP that since April is considered a peak season for IELTS, the speaking exams are distributed in the earlier days of the week.

So on a Tuesday afternoon, after searching for Salustiana D. Ty Tower, Makati in Google, I wore my bravest face to battle. I left our house in that summer midday; and if anybody saw me, I bet I looked like a lost kid in heels strolling the grills of an oven.

I have with me a vague direction to the testing venue from my mom which I saved in my mobile phone. I swear I tried following the said guide but after wasting a few sweats in the streets of Makati, I found myself hailing a cab. My lucky stars must have lost power that time, as Mr. Cab Driver was on the same clueless level as mine. Good thing there were traffic policemen everywhere and I arrived on the infinite building at a reasonable price. Salustiana D. Ty Tower by the way is impossible to find: it has no label whatsoever. If there is one, it sure is not noticeable.

Despite all the drama, I arrived one hour and 25 minutes earlier than my schedule of 1325H. I freshened up, waited, went down to the lobby, waited some more, then chatted with some of my fellow applicants. Those scheduled that day was sure a vast group: there were adolescents with parents in tow, young adults, and married couples. There was certainly no dress code: one applicant was in his cargo shorts and flipflops — a stark contrast to my corporate dress and heels. That time, I remember what one IELTS reviewer told me: “Your outfit may help you pass your speaking exam, but your alone will not make you pass. In fact, you can pass the IELTS bare-naked, but I don’t recommend it.” 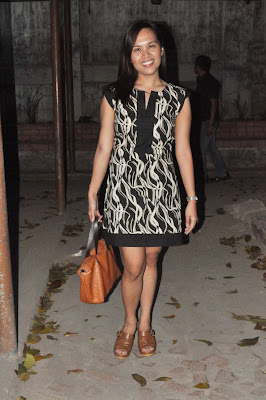 At 1300H, I entered the IDP reception area, registered, and deposited my belongings to a locker they have provided. (In the email I received, they discourage bringing bags during your speaking exam unless you have a companion with you, but if you are to take the exam on the same location, things can be deposited.) I then had my photo and fingerprint taken for identification purposes. It only took about three minutes of staring into space when I heard my name being called by a short brown-haired woman in her 50s: my examiner.

I shook her extended hand, identified myself for the nth time and was ushered to a room resembling that of an executive’s. I was smiling like crazy (indication that I was nervous) the whole time and my nervousness subsided when I saw the room. I thought that with this venue, it will be just like a job interview, and I have always been good at that!

She identified herself but I was so focused on the recorder strategically placed right in front of my face that I did not get her name. So we started with the necessities: she asked for my name and identification card. Then came the question on the topic ‘HOMETOWN’, “Peng, on which part of the Philippines do you reside? Do you still see yourself living there in the future?”

I wanted to tell her that yes, I believe I will still live in Cavite because our house was built through the efforts of my parents and it has sentimental value, but I could not find the word ‘sentimental’ in my vocabulary and the recorder was distracting, so I settled on the word ‘important’. Drat.

I know I had to redeem myself so when she fired questions on photography and travelling, I did my best to keep my sanity and thesaurus intact. It took us not long to reach the second part of my exam: the individual long turn. Here, the applicant will be given a task card with a series of questions: the applicant has one minute to think about what he is going to say and then two minutes to discuss and answer all the questions in the task card uninterrupted. My task card was:

Say something about a book you have read and would like to read again.

When did you first read it?
What was the book about?
What have you learned from it?
Why would you want to read it again?

I discussed about a heartwarming tale of a mother fighting for her son’s life who has a mysterious and deadly disease. It was one of my favorite books of all time: Maribeth Fischer’s The Life You Longed For. I almost did not call up the title, I would have settled for another favorite: Sophie Kinsella’s Shopaholic series, but I don’t want the examiner to think I’m shallow.

It was rather a long time since I last read the said book so I had a hard time recalling the plot, and I guess I was not able to give justice to the story. I performed fairly well as I was able to converse and answer all my task questions.

The rest of the test was unremarkable. I then found myself not believing it has ended already: no handshakes, just me saying thank-you and claiming my deposited belongings. Ms. Examiner was genuinely nice, she smiles occasionally and nods her head as if agreeing to my spiels.

My journey to Dusit Thani Hotel, Makati was a far cry to the difficult trip of my speaking exam venue: it was absolutely easy I could go there everyday. I reached the hotel lobby one hour ahead of schedule. There was about 500 examinees that day, I panicked a little as the line was so long; people have bottled water in their hands and I have none! I almost purchased one in the hotel patisserie but it costs Php 130: so much for a 500 ml water. I’m sure I can manage.

I entered the testing area with my passport and freshly sharpened pencils and immediately noticed the ice-cold service water in gorgeous glass containers at the end of the ballroom. Awesome!

The exam started at exactly 9 AM. The written exam is composed of 3 parts. The first hour goes to listening: 50 minutes listening to various conversations and answering the questions from what you’ve heard and 10 minutes to transfer your answers to the answer sheet. Next is reading for also an hour, with no extra time to transfer you answers. I was a little apprehensive in this part because I wrote my answers all in CAPITAL LETTERS because it feels safe to do so: I have a rather bad handwriting. It was not clearly stated that this is allowed in the IELTS guidelines though, I remember reminding myself to google that information once I got home.

I just have to say that my seat was comfortable, the invigilators were helpful, and the audio system was great. The writing test came and as I know that is the most challenging sub-test, I have prepared carefully for it. My task 1 was to write an informal letter to a friend who is coming from overseas, I believe I nailed that. The tougher task 2 went something like this:

The knowledge taught in school are worthless and the more important things are learned outside.

I disagreed with the above statement since I am in the opinion that schools provided us with all the learning and skills we need to know before we face the real world. Trigonometry, Swimming classes, and Algebra might be absurd subjects but we will appreciate the time we have spent sitting those classes when the need arises. I, for one, am thankful to the theories, no matter how small, as it has saved my face a million times. Thanks dear Alma Mater.

The exams ended at exactly 12 NN, I left the hotel like any normal person, when in fact I just faced one of the biggest battles of my life so far. It was so hot outside, but I felt refreshed and very light.

I googled my capitalization issue, and it is legal to write in capitals. Thank God.

Okay. It’s not exactly the scores I expected, I initially was disappointed but hey, this is acceptable. Four months ago, I prayed, wished, and hoped: Lord, please give me a band score of 6, even though I know I deserve better, but at least a 6. Now that my wish was granted, it astonished me. My God, why haven’t I asked for more? I almost wanted  to file for a recheck but dismissed the thought altogether. But just for the record: I cannot believe my scores!

My new mantra: “There are more important things in life than pride.” Right now, I am just grateful.The bottom line is…

More on Preparing for IELTS On prospect: Regina RICA