I can’t believe another year just passed! Here I am again writing down my favorite post series which has been a yearly tradition since 2011. If you’re a first time reader, let me tell you that every start of the year, I list down a number of people who have made significant contributions in my life for the year that just passed. This year-starter blog post is my way of thanking them for helping me get through the past year. Every list is different, and I always look forward to collecting these names and the excitement just wouldn’t leave me until I’ve finally hit the ‘Publish’ button.

So if you’re as excited as me, I wouldn’t waste your time any longer. 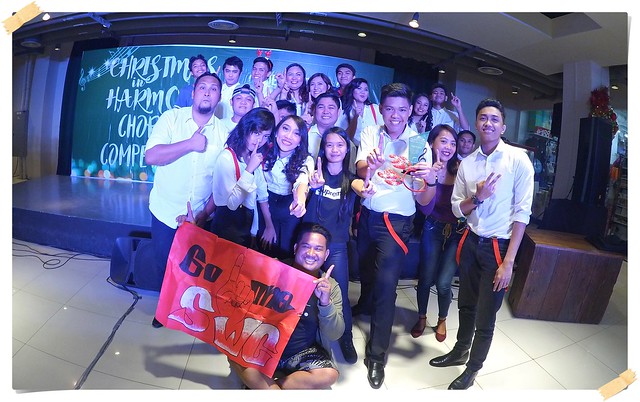 The last two months of 2017 took me back to the #choirlife. I helped out a friend who is a member of The Summerwind Choir (SWC), as they needed guest singers for their Christmas performances. Just a backgrounder: I’ve been a chorister for 11 years starting when I was a little children’s choir member until the year 2013 when the Marian Choir of Cavite went on hiatus. Afterwards, I never sang with a choir again. So four years of virtually no choral singing came as a shock to me. But luckily, SWC made the transition easy. They welcomed me to the group and gave me enough time to finally find ‘my voice’ again. I was then reminded of how challenging yet fun it is to be part of a singing group.

I am in awe of SWC’s genuine concern for each other and their fearless attitude towards competing and showcasing their talents. Unlike me who just considers singing as one of my talents so I don’t focus on it much, this group literally live and breathe music. I was a bit surprised to see some members still singing and playing instruments during rehearsal breaks and even after the rehearsal itself, as if their energy for creating music is limitless. They might not be the best or the most prominent choral group now, but if they continue to hone their skills and nurture their passion, I know they’ll go places.

It’s difficult to imagine how much work goes into preparing one song, more so, one entire repertoire. And for that, I salute SWC and all the singing groups all over the world. Thanks for the awesome Christmas guys! I really had fun! 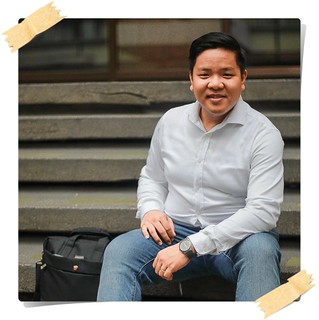 In 2017, I opened a new niche for my blog: FINANCIAL MANAGEMENT (disguised in the word MONEY on my homepage). I believe that financial literacy is something that Filipinos lack, that’s why many are living way below the poverty line while some have no idea of how to prepare for their retirement. Of course, I am no expert in finance, and I’m just lucky to have met people who have the same advocacy and who are willing to educate me. Orb is a licensed financial advisor from Sunlife and I salute his dedication in helping more people secure their future, whether they buy insurance from him or not.

His Facebook page Pinoy Money Advisor and even his personal profile are filled with inspirations and opportunities on how one can effectively use his money and grow it. It’s a constant reminder for me of the importance of spreading financial literacy because many people will benefit from it. The world needs more people like you, Orb! Cheers to financial literacy and congratulations on the birth of your son! 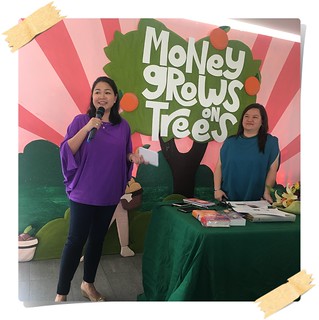 Like Orb, Clarissa and Sharon are financial literacy advocates. I met them during the launch of their book ‘Money Grows on Trees’. They are two inspiring women who have good command of their finances and are very generous to share what they know to the world.

It’s a plus that they are both women and so it just shows that wives and girlfriends can be financially independent and not just rely on the income of their partners. I got to know them more when I read and reviewed their book and they become catalysts to my journey towards improving myself and finding happiness in all of life’s aspects. Thank you for the inspiration Cla and Sha, you deserve all the success! 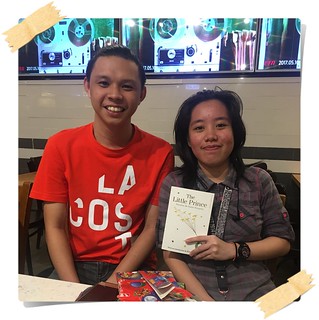 In 2017, an opportunity to work in Germany opened for me. This did not affect just me though, but also my officemates. Luke and Andrea are content writers in the same company where I’m working. When I decided to limit my work hours to make way for my German Language classes, they took the bulk of my work. I know it wasn’t easy for them considering how young they are, but they accepted the challenge really well.

Despite their age, they are responsible and flexible individuals who seem to be ready for whatever life throws at them. I wasn’t like that when I was their age, and that just got me thinking: maybe life could’ve been waaaaaaaaaaaay easier for me if only I had the same attitude. But hello, past is past LOL! Congratulations Luke and Andrea! I’m proud of you guys! 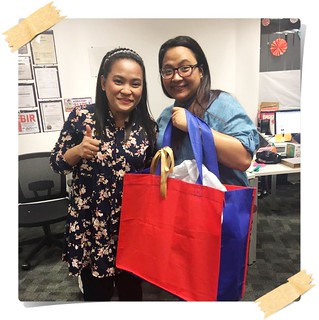 Ms. Belle and Ms. Mye are some of the top officials of our company and they are best of friends. I’m just amazed with the support they give each other even though work days are not always easy or fun. I always thought that working together in one company is bad for friendships but Ms. Belle and Ms. Mye proved me wrong. They always have each other’s backs. They already know if one is having a hard time at work and there are times that they talk to the team to rectify the situation before it gets worse.

I look up to these girl bosses as they maintain their friendship and chase their dreams together. Congratulations on finding each other Ms. Belle and Ms. Mye! 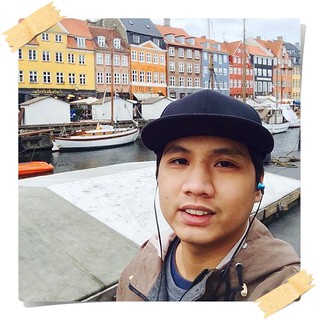 Jiro is a web developer and a former officemate. If you’re wondering who gave my blog the awesome look it has today; it was him who did all the work. When we were still working together, he strikes me as a quiet guy who sometimes throws jokes that crack the entire office up. I never imagined him and me being close or more than people working in one office though.

But then one day, he asked me if he can fix my then very dull blog. I said ‘No’ because I’ve already had a bad experience with a web developer. But Jiro was persistent, and so I finally gave in. Well, it turned out to be one of the best decisions I’ve ever made because just look at my blog now!

He’s not part of this list just because he fixed my blog, but because shortly after he was done with it, he transferred to another company. I thought that was a really brave move, but I must say that I was a bit surprised. Again, he didn’t strike me as someone who has the guts to leave his comfort zone, but he did just that. The next thing I knew, he was on a flight to Denmark thanking me for allowing him to work on my blog and that led him to the realization that he could do so much more.

I really have no idea what happened there, but more than anything, you also inspired me Jiro, in a way I can never put into writing. I am an instant fan of anybody who goes after their dreams and leaves their comfort zones so you get a spot on this list. Thank you and congratulations! 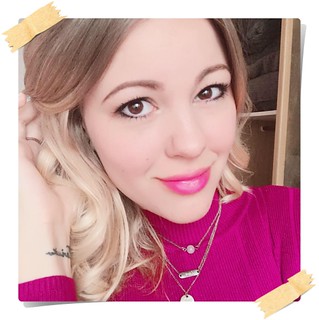 I met Romy through the travel platform Couchsurfing. She’s a German Language teacher who did her internship here in the Philippines. Her school and accommodation were just a few blocks from my house and so during the weekends, especially when I am in need of assistance for my language class, I go to her place. She’s a sweet and funny girl who is passionate about sharing her beautiful language to Filipinos.

Whether she is in Germany or here in the Philippines, she’s always ready to help me out even if technically, I’m not part of her official class. Having a friend like Romy gave me a glimpse of what it’s like to make friends in Germany. Vielen Dank liebe Romy! 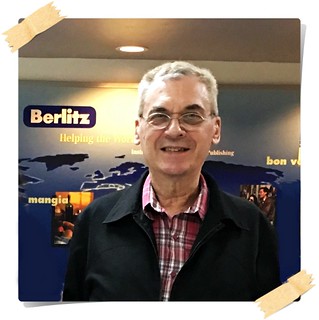 Sir Guenter was my German Language teacher and boy was he a strict teacher. He isn’t liked by many, but that tells more about them than him. He’s someone who would really push you to your limits so you’re confident that you’ll pass and not just rely on luck to pass the exams. To be honest, this mentality saved me from a lot of headaches and worries when I was waiting for my test results. He is instrumental in my success of getting my B1 German certificate. How can I ever thank you, Sir?

Sir Guenter knows that Germany doesn’t deserve mediocre workers and he starts training us, his students, this early. I believe that beneath his strong personality is a teacher who wants to bring out the best in each of his students. He taught me a lot of things beyond the language which I believe has prepared me well for my future life on that other side of the world. I mean, if I couldn’t stand one grumpy German guy, how do I expect to mingle with millions of them once I land in Germany, right?

If I would describe the year 2017 in one word, it would be TIRING. I spent most of the past year working and studying during the weekdays and blogging, singing, etc. during the weekends. Luckily, I have my family, friends, and the people above who helped me.

I know I can never thank them enough, but I hope this post can do something about it.