But just as with any solo travel, you’ll never be truly alone in the journey. Just look at the featured photo I chose for this post.

Anyway, I’ve been looking forward to Oktoberfest since day 1 of my language class. This is actually one of the reasons why I headed to Germany. Now that I’ve done it, I can actually go home to my country, LOL 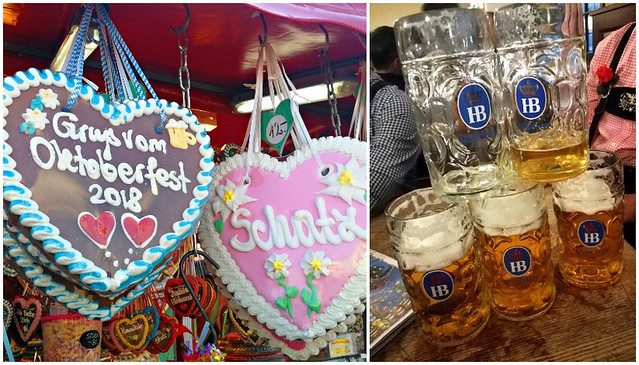 A bit about Oktoberfest

Oh, you might be wondering why I’ve been spelling October with a ‘K’. Don’t worry, I haven’t totally lost my English: that’s actually the German spelling. So, the first ever Oktoberfest in Bavaria was celebrated in 1810 during the wedding ceremony of Prince Ludwig and Princess Therese. The event was such a hit they decided to do it annually. The grounds where the festivities are held, Theresenweise, was named after the princess. When I arrived in Munich, Bavaria’s capital, I noticed that the locals simply call this place ‘Wiesn’.

Wiesn is a 420-square feet public park half of the year. Come June, the giant tents and amusement rides slowly fill this area in preparation for the big annual event.

This year’s Oktoberfest happened on September 22 to October 7 and hosted 6.3 million people from all over the world who drank 7.5 million liters of beer. So proud to be part of this cool crowd, LOL.

Next year’s festivities will be on September 21 to October 6, 2019.  Remind me to file a leave for that.

My decision to travel all the way to Munich from Stuttgart was a bit out of impulse. There’s a similar beer event here in Stuttgart and I’ve received advice from friends that I really don’t need to go to Munich to enjoy it.

But I’m hard-headed and I wanted to see the real thing for myself. And I’m just glad I did! In my opinion, Munich Oktoberfest is many times better than the Canstatter Volksfest in Stuttgart (more on this later).

I used Busliniensuche to book my two-way trip. This website is very practical as you have different modes of transportation (cars, bus, trains) in one screen and you can easily compare them in terms of price, the time and length of the trip, and many other factors.

I took BlaBlaCar, a car sharing platform from Stuttgart to Munich and FlixBus on my way back. One way trip was approximately 4-5 hours.

Upon arriving to Munich, I bought a three-day ticket at the main station (Hauptbahnhof) which is valid on all forms of transportations (buses and trains). This is one of the things I find really amazing here in Germany: their transport system is unbelievably reliable (meaning most of the time punctual) and they have options for day and group tickets so you wouldn’t need to waste time paying for each of trip: you can just get in and off the vehicle anytime.

Where I stayed for Oktoberfest

I spent 3 days and 2 nights in Munich (on a weekend) and I decided to use Couchsurfing (CS). If you’re not yet familiar with this website/mobile app, it’s actually a social and hospitality platform for travellers. Here, the locals share a ‘couch’ or a room in their home (thus the platform name). It’s also a way to meet new friends, find travel buddies, and exchange culture and language.

To be honest, my main reason in getting into Couchsurfing was to save money for my travels. Who wouldn’t want a free roof on your head instead of paying thousands for hotels, right? I’ve been a Couchsurfer since 2015 and did a handful of surfing, hosting, and meet-ups even before I arrived here in Germany. In these three years, I’ve met amazing people, experienced places beyond the fancy tourist spots, and widened my view of the world.

I now believe that Couchsurfing is way more than the free accommodation, it’s one of the ways for you to believe again in the kindness of people. Because of Couchsurfing, my faith in humanity is continually restored.

[Read my other Couchsurfing-related posts here]

When I travel alone, I prefer to use Couchsurfing because it makes me feel safer knowing someone who is a local in the place I am visiting. At least if something goes wrong, I can easily ask for their help instead of contacting some hotel personnel who I don’t have any association with and to be honest, doesn’t have my best interests at hand.

Couchsurfer Alexandra, a fierce and gorgeous woman about my age, who has an equally gorgeous apartment, welcomed me to her place. Just look at these photos and tell me I’m lying: 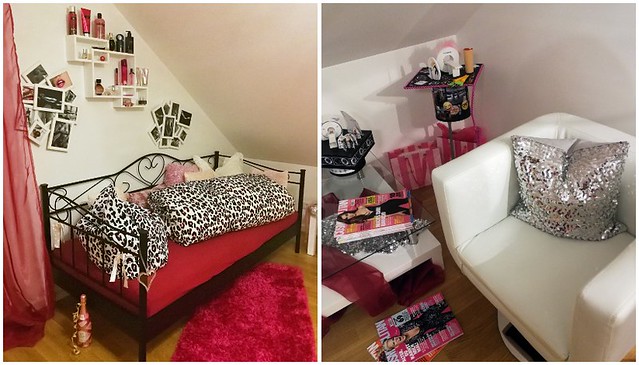 However, if you’re not fond of the idea of staying in someone else’s home for Oktoberfest, you can always book a hotel or hostel. But you have to be very careful! These rooms or beds can go up to 400€ per night because of the huge demand of people. You would also need to book in advance to ensure your slot.

Another Couchsurfer told me about Lost Souls Travel, an agency offering cheap tent or bed (in a bus) accommodations across Europe’s famous festivals. This could be a way to find travel buddies and new friends. I lost contact with the said Couchsurfer though, so I couldn’t share anything about this travel agency.

Alexandra (my host) agreed to come with me to the fest so she said someone will ‘protect me’. Humanity kindness at its finest right there.

It was fortunate that on the day I arrived in Munich, she and her colleagues also planned to go to the fest and she tagged me along. We started drinking and chatting in the Old Wiesn, which she said was more of the ‘traditional’ Oktoberfest. Here, one can enjoy a laid back atmosphere with cozy Bavarian music: very different from the normal beer tents.

Afterwards, we also tried one amusement ride before experiencing the ‘real’ Oktoberfest. You can just tell how much fun I had in these photos:

We then tried getting into the tents, which wasn’t very easy, mind you. There were just too much people! It’s a good thing that these locals I was with are already experts and so they taught me how to run, jump on the tables, and order beer when the guards weren’t looking.

When we secured our table in one of the tents (I have no idea which one), we spent the rest of the night drinking beer, singing, bumping our glasses among each other’s glasses, and dancing on tip of the benches.

It’s my first legitimate Oktoberfest experience and I know I’m doing a lame job writing about it. Because how can you narrate such awesome of a night? 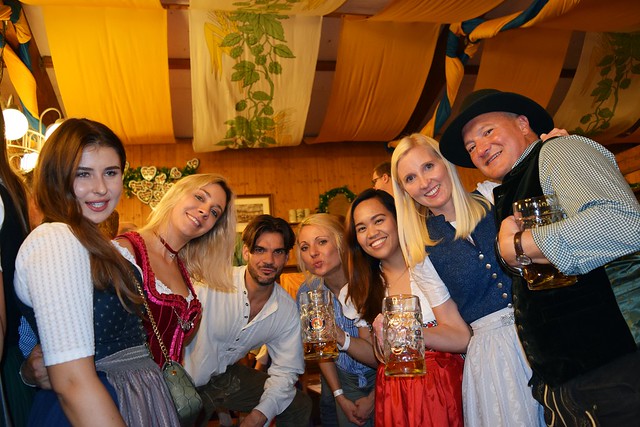 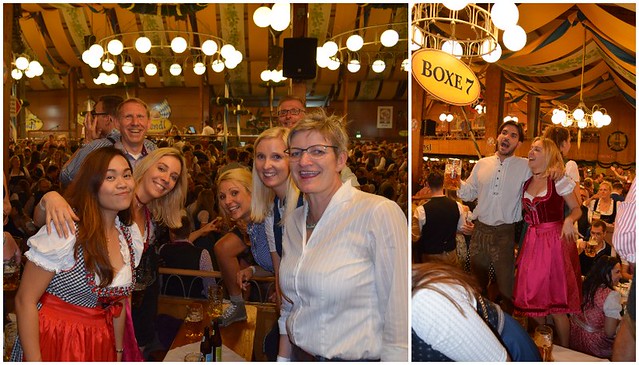 I also met up with Karsten and Doreen, a couple I met also through Couchsurfing. They wrote me on the platform and we later found out we have the same interests: beer, writing, and stock market investing. We communicated via WhatsApp weeks before meeting in Munich. I failed to meet them when they first invited me over but when we finally met, we went to Hofbrauhaus, one of the oldest beer places in Munich. Here, we met other travellers who immediately became our friends just because we are sitting and drinking beer in one table. 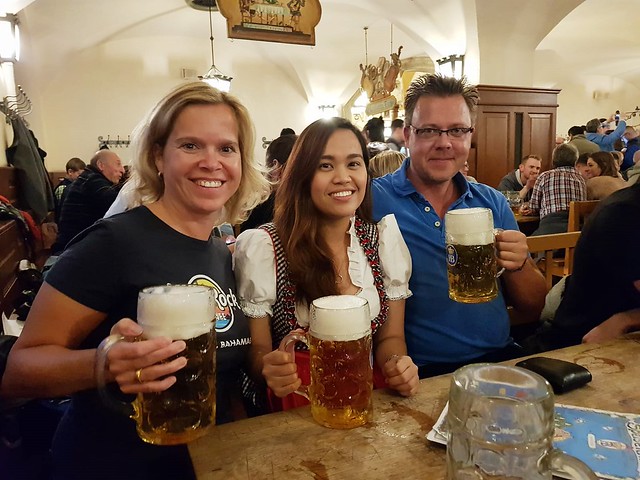 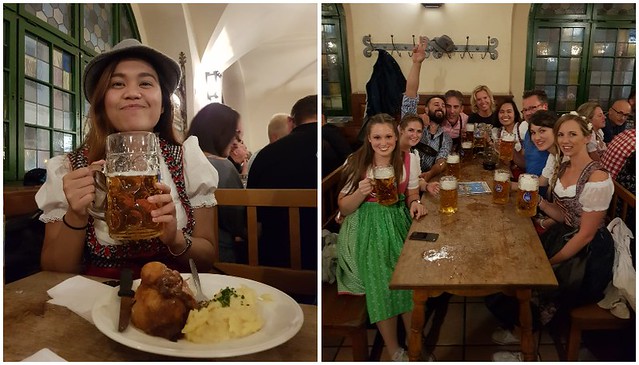 How to Oktoberfest Safely as a Solo Female Traveller

It’s safe practice to leave the details, specifically the name, address, and contact number of where you are staying with people you trust. Also tell them how many days you’ll be away and who to contact in case of emergency.

One month prior to my trip to Munich, I scoured the CS website for hosts. Since I know I’ll be going on a drinking event, I made sure I picked a female host. Of course this wouldn’t guarantee anything, but it just made me feel safer. I have no problems staying with male hosts or hosting male Couchsurfers, but in this case, I preferred to play it safe and contacted a female host in Munich.

I remember only sending one request and luckily, Alexandra confirmed. She said that the way I wrote my request made her approved it! Ahem, thanks writing skills, haha. Hmn, I might write a blog post on how to choose CS hosts and surfers and write surfing requests *wink

Dirndls are traditional women clothing in Bavaria and by showing up in one, you display respect for their culture. Or you just want to be cute, but it doesn’t matter, LOL. My point is, it’s just plain offensive and this post even says never to go to Oktoberfest without a cleavage! (Read it, it’s hilarious yet informative)

If security is what’s keeping you from wearing a Dirndl, take my host, Alexandra’s advice:

These wise words are gold and in many times helpful in my 3-day Oktoberfest stint. It’s no secret that everyone is intoxicated with alcohol in this event and some might take advantage. I myself had encounters with such people but it’s really a matter of choice and sound decision making.

If security isn’t your concern but rather shyness because you feel it’s an awkward piece of costume probably, then worry no more. I was a bit hesitant at first too, but when I arrived in Munich, there were Dirndls and Lederhosen (traditional clothing for men) everywhere!

As in overall: in the train station, on the streets, in the mall… Name it!

Everyone was wearing them, young and old, and you can even buy them on the streets. It was even more awkward to wear normal clothes in that huge crowd. 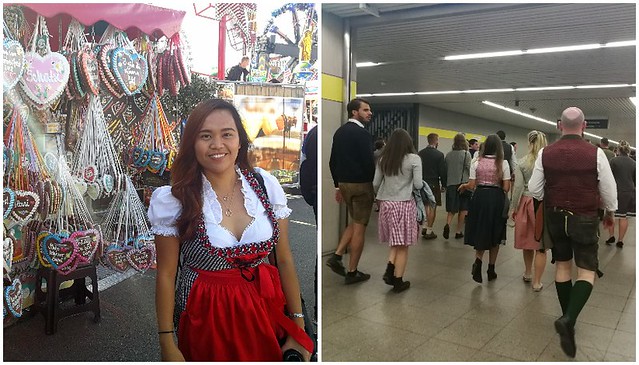 Oktoberfest here in Stuttgart, or more appropriate the ‘Canstatter Volksfest, was very different. Only a few people are wearing Dirndls and Lederhosen so it’s a bit uncomfortable to wear one.

Or rather drink responsibly. You wouldn’t probably go alone to this beer event if you have no idea of how high your alcohol tolerance is, right? But no matter how high or low that is, it’s self-explanatory that you make sure you are able to travel back and arrive to your place of accommodation in one piece.

Beer during Oktoberfest is served in Massen (one liter pitcher-like glasses). Try ordering a ‘Radler’, which is 50% beer and 50% lemonade; it tastes really good and will keep you sober for long.

Don’t make the same mistake I did. I was using my phone and mobile data the entire day for directions, communicating with other travellers, checking out social media, and taking photos. I didn’t think of bringing a powerbank because my phone usually survives the day without one.

But boy was I so wrong.

On my second night in Munich, as I was on my way to my host’s home, my phone’s battery died. It was past midnight, it was so dark and cold, I had alcohol in my body so my mind isn’t that sharp, I was wearing a Dirndl, and I was in a completely unfamiliar place.

I couldn’t contact Alexandra as I don’t have her number elsewhere but my phone. I was also in her house just the day prior, so I wasn’t too familiar of how to get there.

Again, it was too dark.

But thank God for my relatively decent Deutsch; I was able to ask a lady I was in the bus with for directions. After a few minutes of walking, praying, and trusting my instinct, I arrived at Alexandra’s home safe and sound.

I just couldn’t contain my happiness the moment I saw the familiar façade. Whew!

Thank you Lord for keeping me safe despite my stubbornness.

I guess you’d agree that my first Oktoberfest is really one for the books: truly amazing and worth telling.

So, do you have other tips on how to Oktoberfest in a safe yet fun way? Share them below! They might be helpful to other travellers, solo or not.