September 1, 2018 – On one side of the planet, ten thousand kilometers away, Christmas has already begun. Choirs singing merry carols are on TV, malls everywhere play Jose Marie Chan hits, and many are getting started on decorating their homes and shopping for gifts.

Well, because from where I came from, the beautiful land of the Philippines, we celebrate Christmas the moment the calendar says ‘BER’ – on September 1 until just supposedly the New Year in January, but why keep the celebration short? So we extend until February. Yes, we’re so crazy about the holidays we spend five months in its spirit!!! Try entering one Filipino home and you’ll definitely find Christmas decors still up by February; this post then, is far from being late.

Okay so back to that first day of September, I remember waking up that morning greatly excited.

But when I opened my eyes and stared at my bare bedroom, I heard nothing: no Christmas carols from the TV (well firstly, we don’t have a TV). Okay, that’s weird, I said. When I looked out my window, my neighbors have seemingly no plans of decorating their homes yet. Super weird.

I heard nothing but my growling hungry stomach and at that point, my everyday struggle of figuring out how to feed myself began. 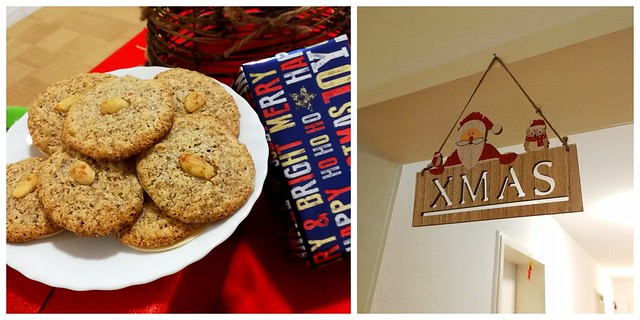 I arrived in Germany in June 2018 so this is my first ever Christmas away from home. In my short stay here, I’ve learned that this time of the year is probably the hardest for anyone living away from family. The need for companionship during the merry season, coupled with extreme cold I’ve never before in my life experienced, makes everything twice as gloomier.

It’s actually my first winter and I’ve already decided that I hate it. It’s just too much of a hassle to leave the house covered in layers and layers of clothing. I couldn’t move properly as everything is so heavy.  And if it’s not snowing, it’s raining all day long! The atmosphere is so sad because there’s no sun the entire day.

Oh, I hate it even more when it’s snowing; thus this blog post’s cover photo (I intended to take a photo of me during one of the snow falls but I’m too demotivated so nope, that’s not gonna happen. Not even for blog publicity, hehe. Maybe I’ll do better next year, peace out)

So how is Christmas different in the Philippines and in Germany? 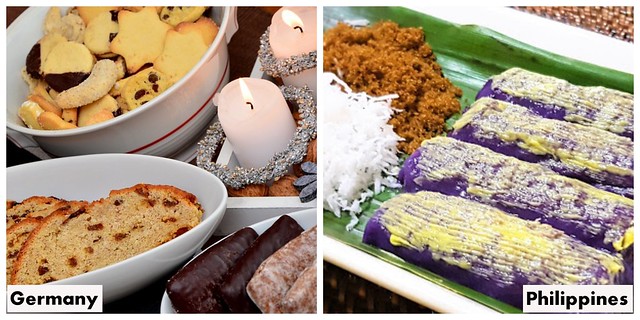 Germans have food and drinks which are specific to the Weihnachtszeit (Christmas time). Sweet treats like Lebkuchen (gingerbread), Stollen (fruit cake coated with powdered sugar), chocolate Santas, and cookies are commonly served and gifted. In the drinks department, Glühwein (hot wine) is a favorite. Germans like to showcase their talent in baking and they usually make these treats themselves. I even had the opportunity to bake Macronen (macaroons) and surprisingly, they were edible LOL.

On Christmas Eve, food in every home is diverse. The most common dish served all over the country though, is the good-old potato salad and sausages, as if they don’t eat them all year round.

Well, it seems that Filipinos aren’t too much different from Germans then! Because just like what the entire world knows, we love rice. And even though we eat them three times a day, we still have special rice treats like Bibingka and Puto Bumbong come Christmas time. No kidding. 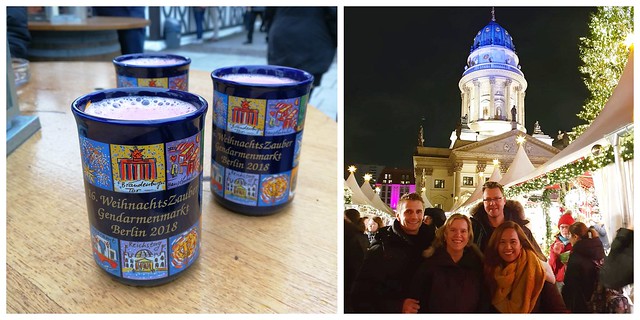 Apart from beer and fast cars, Christmas markets also made Germany famous throughout the world. The delicacies above are best consumed while standing in the cold. Christmas markets are common venues for people catching up with friends and shopping for handmade decorations and gifts. The aroma and color of these markets make them very popular to tourists that many “market-hop” to different parts of Germany to experience them.

We don’t have anything like this in the Philippines, at least not official ‘Christmas markets’. But we do have pop-up stores called ‘Tiangge’ where one can buy cheap clothes, toys, and gifts. 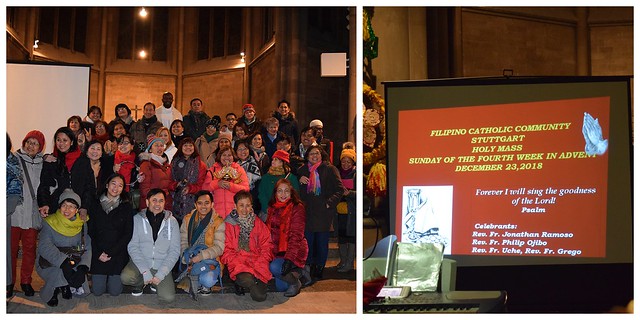 More than 75% of Germans are not affiliated with any religion so it’s common to see almost empty churches during Sundays. The number of people going to mass increase slightly during Heiligabend (Christmas Eve) and on Christmas Day itself.

I’ve been a choir member since I was 16 and for my first Christmas here in Germany, I signed up for a choir project. We sang during the Christmas day mass and not only was my voice challenged but my Deutsch as well. The choir master’s instructions were, of course, all in German and I had to always confirm to the singer next to me if I understood the instructions right. I survived though and here’s an excerpt of our performance:

The Philippines is a huge Catholic nation, one of the biggest in the world. We practice ‘Simbang Gabi’ wherein we celebrate mass for nine nights or very early in the morning prior to Christmas day. It’s a form of devotion to show our anticipation for the birth of Christ. I was fortunate that here in Stuttgart, there’s a huge and active Filipino community, that’s why we were able to continue the tradition. Some Filipinos who have long lived here were very generous to sponsor food and refreshments after the mass so my colleagues and I enjoyed the company and felt really at home. The psalms, songs, and even the homily were in our native language as the priest is Filipino. There were instances though that we have visitors who are Germans or from other nationalities so I’m not sure how they took it, yikes. 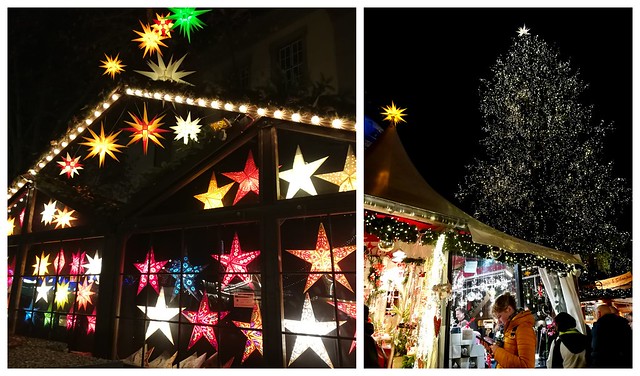 In Germany, genuine trees (I repeat, GENUINE) are commonly erected on December 24 and immediately put down the next day, the 25th. WTH. In the Philippines, artificial trees are up for eternity: well as already mentioned, from September to February. Some houses (including ours) also put up lanterns and they never leave their spot all year round. We just don’t light them up but they’re always ready for duty, LOL. 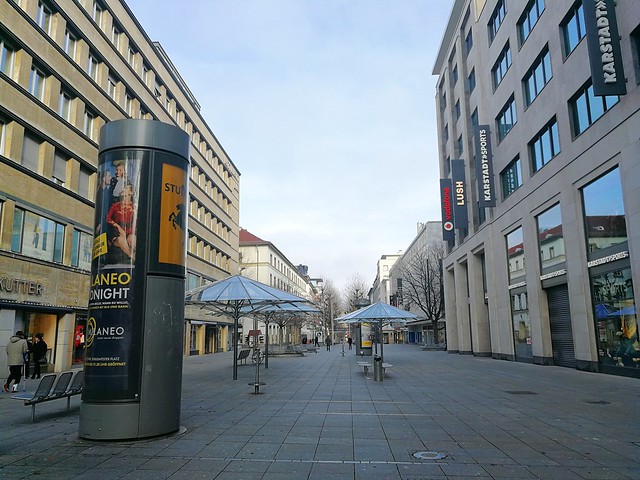 In Germany, December 25 is first Christmas Day and December 26 is second Christmas Day. I totally had no idea about this until my Deutsch teacher asked me on which Christmas day I will be singing with the choir (because she wanted to watch). I was so puzzled that I asked her: “I’m sorry, but as far as I know, there’s only one Christmas day, right?”

Just like Sundays and any other holidays here, stores (malls and groceries included) are closed. They are open only until 1PM of December 24, so it’s a must to stock the cupboards up as the stores will open next on December 27 already. Since everything is closed, people stay at home and the streets are empty. For Germans, this is their time to relax after the long and hectic preparation for the season. The shot above was taken around noon of December 25.

It’s the exact opposite in the Philippines. Malls are wide open on December 25, the only Christmas Day we have. There are so many people outside: children are visiting their godparents to claim their gifts, and families eat in restaurants, go shopping, or watch movies. It’s so loud, so hectic, and so fun HAHA. 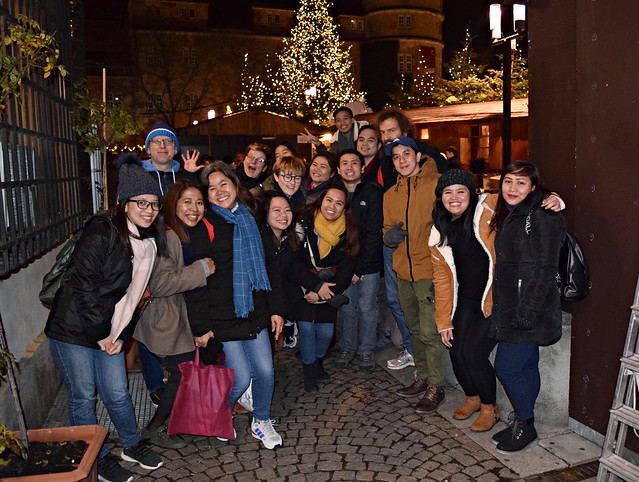 How Filipinos differ in celebrating Christmas

It’s not just my first time celebrating Christmas away from home but also my first time spending it with people I barely know. I’ve only met my present colleagues upon arrival here and although we came from one country, I was so surprised that we see Christmas differently.

Some weren’t too interested in decorating, planning parties, or even getting together for our first German Noche Buena (Christmas Eve dinner). This is in huge contrast to what I’ve been used to. In my family, we are really big on Christmas and we plan it thoroughly plenty of months before. Without me knowing though, I just assumed that this is the same for all Filipino families.

And boy was I so wrong.

Truly, one can never generalize an entire nation. A colleague explained to me that she’s not interested in the merriments because back home, some members of her family changed into another religion and to them, Christmas is just like any other day.

My understanding then of people, from my own country or from anywhere else, widened. It’s not so much different from what I’ve listed above: some Germans may put up their trees for only two days or serve potato salad on Heiligabend, but in some homes, these practices may be totally different. 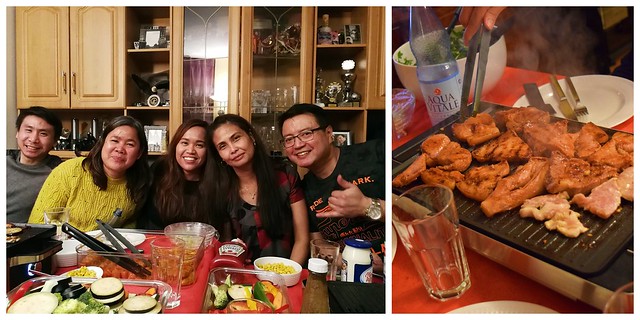 How I actually spent Christmas and New Year

On Christmas Eve, my colleagues and I were ‘adopted’ by a Filipino family who has long lived here in Germany. European Noche Buena was in order that night. We tried ‘raclette’, a traditional Swiss dish, and grilled some meat. But just like in any Filipino party, karaoke and alcohol weren’t forgotten. 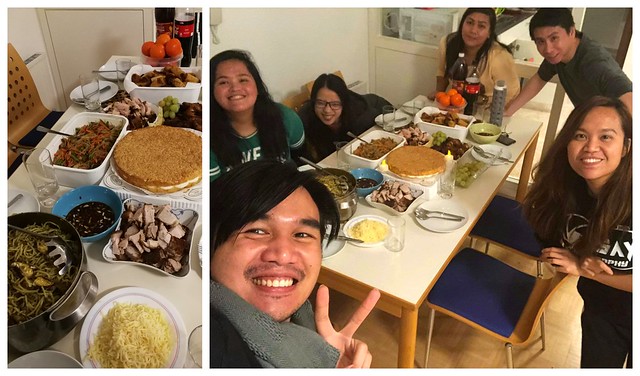 On New Year’s Eve, we gathered and cooked Filipino food like pansit (noodles with vegetables), deep-fried pork, and spring rolls at home. We also tried to see how Stuttgarters welcome the New Year: we went to Schlossplatz and found people lighting fireworks in all directions possible without a care in the world who can be injured by them. It was probably the most dangerous night of my life in Germany and I’ll be sure to stay away from that place next year.

On both days, of course, I didn’t forget to call my family 10,000 kilometers away: 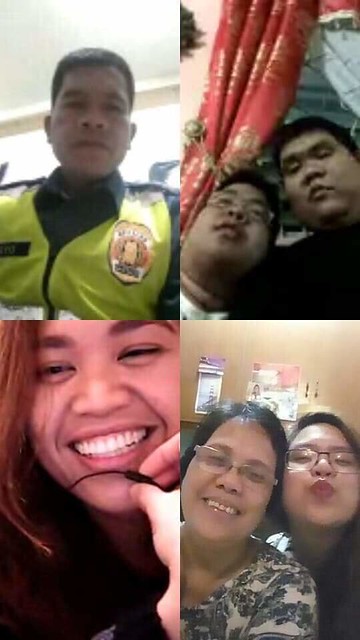 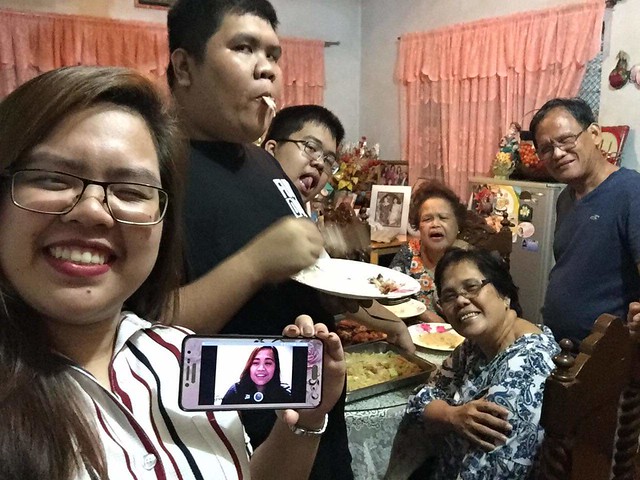 I still have so much to learn about German Christmas and New Year. And being the true-blue Filipino that I am, I’m already quite excited for this year’s festivities. I guess it’ll be impossible for me to eliminate my intense desire to celebrate this season for ages.

I remember sharing this trivia to a Hungarian colleague. She was so surprised and was even very honest to say that she doesn’t find that good.

And you know what: I DON’T CARE.

Because 10,000 kilometers away, an entire nation chose to be merry for almost an entire year and I can’t find anything wrong with that. Tschüss!