I Learned to Fly and Watched A1 Boyband in Norway

SKE, NO, 26th April 2019 – 90’s Boyband A1 performed as a four-piece before a live audience after almost 17 years. It was the first time they sang with the original member line-up after Paul Marazzi left the band in 2002. They did sold-out reunion concerts in Asia last year and kicked off its European leg in Norway. And since I’m already living in Europe, I made sure I didn’t miss it for the world.

Anyone who has known me since grade school is aware of how crazy I am for A1. The last time I saw them live was seven years ago but that was without Paul. I’m glad they patched things up and got back together. Through the years, I followed them on social media and found friends who are even crazier as I am through the A1 Reunited Philippines Club.

[Related stories: Gaga over a1, the Boyband, A1 Came Back in Manila, and I Missed Their Show]

When A1 announced that they are doing a concert in Norway, I bought a ticket right away even though I had no idea how to get to Skien, Norway from my standpoint (Stuttgart, Germany), LOL. I was eventually joined by friends and a full-blown Scandinavia trip (Denmark, Norway, Sweden) was created.

On the concert day itself, we arrived at Skien at around noon from Oslo and due to our excitement; we already lined up outside the concert venue two hours before the doors were open. We then met fellow Filipino fans and was even interviewed by a vlogger as she was amazed that we traveled far to see the boys perform. 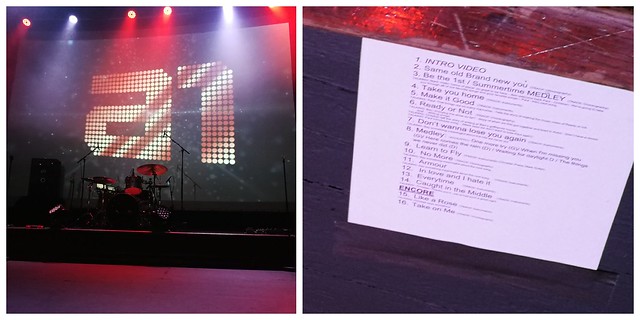 My favorite part of the show was when Christian introduced ‘Learn to Fly’ as a song that’s very dear to him. The awesome lyrics, which he has written himself, talks about how life can be frustrating at times when nothing seems to turn out right. The song teaches us not to give up because hopefully, the next chapter will be better and more beautiful. If only we all give ourselves more time, everything will turn out fine.

I was able to relate to Christian’s short speech because I’m at a point in my life where I’m struggling with everything. I moved from the Philippines to work here in Germany 11 months ago and life has not been very easy. I’m not used to living on my own. All my life, I always have my parents and my siblings helping me out. But now that they are miles away, I’m overwhelmed with all the things I have to do alone. I’m failing at the simple things: taking care of myself, keeping my room or my clothes in order, maintaining my hobbies… everything! My body also couldn’t adjust to the weather and I feel exhausted all the time. I couldn’t really pinpoint the problem. All I know is, it’s a very difficult time.

The song and its beautiful lyrics lightened my burden a bit. I’ll hold on for as long as I can and allow myself more time to learn then. I’m a bit impatient though, so hopefully, things will start getting better soon.

When A1 sang ‘Learn to Fly’, I was so focused on watching them I failed to record anything. Here’s a video with lyrics from YouTube though which you can listen to:

Here are some other videos I took that night:

The event lasted for about 2 hours and I couldn’t believe such a great night could pass by that quick. My friends and I then stayed at the concert venue to wait for the boys to go out, take photos with them and personally thank them for the awesome night.

Yes we got to talk to them like face to face!!! My grade school dream materialized right then and there!

They were shocked to learn that we came all the way from Germany to watch them! We initially said we flew from the Philippines but they weren’t having any of it, LOL. Here are some of our photos:

Watching A1 in Norway was so fun! I couldn’t believe how near we were from the stage and how easy it was to meet and greet the boys after the concert. I didn’t even need to pay extra! I remember paying almost the same amount for the concert ticket almost 7 years ago and I was seated then very, very far out, since the event location was a huge arena: the Araneta Coliseum. I’m so thankful for the opportunity and I even got to tour Scandinavia as a bonus! Truly awesome!

Another thing I’m very proud about is having chosen A1 as my favorite band of all time. I’m proud that they turned out to be super down-to-earth and talented artists who love their fans, each other, and their craft. It’s great that their music is still relatable after so many years. I’ve grown to love and respect them as musicians and not just boys with pretty faces who can sing and dance.

I love you Mark, Christian, Ben, and Paul!

More power to you guys!

P.S. Catch them live as they have another concert in Norway this September and almost sold out concerts in the UK in November. Yes, already sold out this early 😛

The Local: German News in English – Review + Giveaway Downright Weird: This Hostel in Sweden Had No One in Reception Our Entire Stay, and the Days Before That